For more than 15 years, Lone Star Hazmat Response has excelled at providing industry-leading emergency spill response as well as safe and effective environmental remediation services. The company has steadily added to its capabilities and now maintains four strategically located rapid response centers in eastern Texas, which allows it to deploy rapidly whenever an emergency requires its services.

The Lone Star Hazmat Response team, which comprises hazmat specialists and incident commanders, works closely with first responders including firefighters, police, and paramedics to provide critical support across a range of hazardous materials incidents. These include roadside emergency spills involving oil, diesel fuel, and gasoline, product transfer for situations where fluid must be moved from a compromised vehicle to another, or in the unfortunate event of an oil, gas, or saltwater release.

As part of its commitment to ensuring the safety of first responders, Lone Star Hazmat Response is using the Ion Science TigerLT PID to identify the presence of potentially harmful VOCs on scene and advise on the level of protection required. 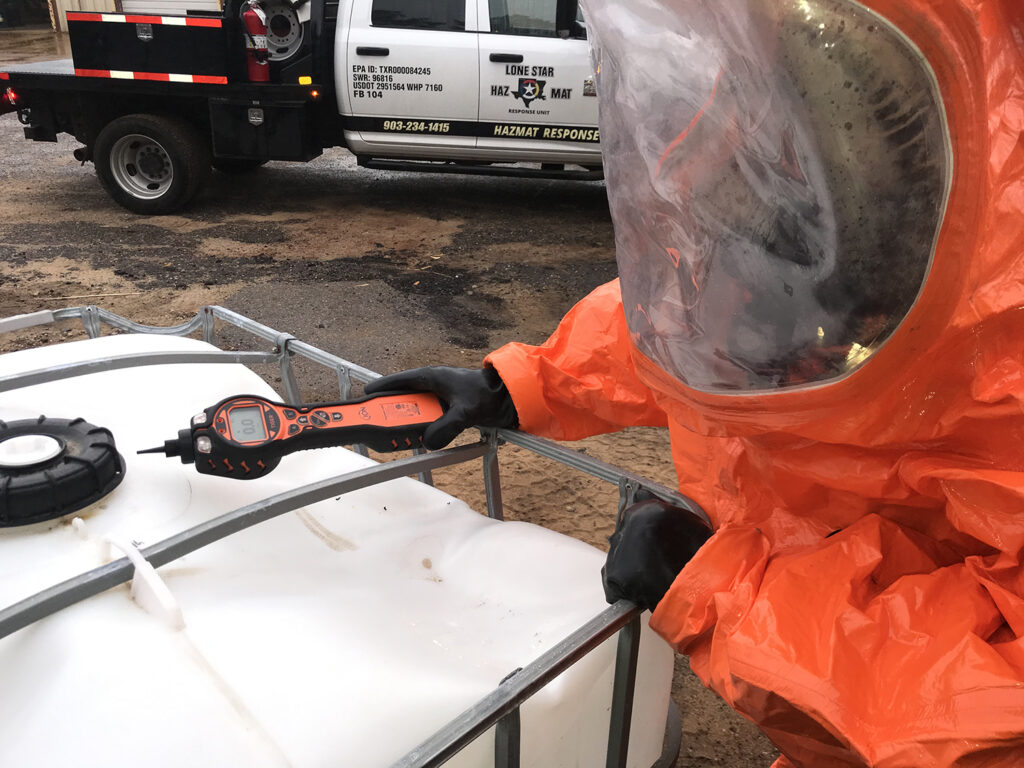 Lone Star Hazmat Response uses PID instruments to quickly identify the presence of gases and vapours. Monitoring the ambient air for parts per million (ppm) and parts per billion (ppb) concentrations of VOCs allows the company to quickly evaluate the danger and determine if leaking fugitive gases are toxic.

Richard Lenius, General Manager at Lone Star Hazmat Response comments: “After meeting Ion Science at the TCEQ trade conference and learning more about its products, we chose the TigerLT handheld PID as it met our cost and functionality requirements. During testing, the instrument proved extremely easy to operate and ready to use immediately after powering on. As we get called out to all kinds of environments, I was also particularly drawn to the instrument’s humidity resistance and anti-contamination design especially as our other PIDs had failed on humid days.”

Like all Ion Science PID instruments, the TigerLT incorporates the company’s market-leading PID technology with advanced patented fence electrode system. This three-electrode format ensures increased resistance to humidity and contamination for ultimate reliability and accuracy in the field.

With a detection range of 0.1 – 5,000 ppm utilizing a standard two-point calibration protocol, Ion Science’s robust TigerLT also offers an unrivaled industry response time of just two seconds and equally quick clear down.
Although a PID is not specific in terms of gas selection, it offers a continuous and almost instant response rate enabling first responders to carry out their duties secure in the knowledge that their exposure to hazardous chemicals is limited.

“By its very nature, emergency response work carries an element of the unknown which can sometimes hinder our ability to quickly provide the vital information needed by first responders to ensure their own protection as well as that of bystanders and the wider community,” Richard adds. “Even in the most challenging environments, a single PID like the Ion Science TigerLT gives fast, accurate and reliable results and a true reading rather than a percentage of mixed air.”

Both simple to operate and service, the TigerLT offers easy access to the lamp and sensor with batteries that can be safely replaced in hazardous environments. The intrinsically safe instrument also meets ATEX, IECEx, UL and CSA standards.

The key advantage of TigerLT over other similar, low-cost handheld PID instruments is its market-leading accuracy and run time due to is anti-contamination and humidity-resistant design. Another attribute is its global Intrinsic Safety certification. Although the accreditation process can differ from country to country, the TigerLT can be used in explosive hazardous areas such as within petrochemical plants that are located anywhere in the world.

It features long-life rechargeable Li-ion batteries which give up to 24 hours usage. Fast battery charging allows the instrument to be fully charged in 6.5 hours, while eight hours of use can be achieved from 1.5 hours of charging time.

Richard continues: “The clear, backlit display with large font enables those members of the team that require glasses to see air readings better than the other PIDs we have used.  It is

also quick and ready for use in comparison. One of the features that we particularly like is the quick button for zeroing the air.”

TigerLT features a protective, removable boot for harsh environments while a large, clear back-lit display allows for easy viewing in any light condition. It is IP 65 rated against water ingress. An integrated torch is designed for directing the instrument’s probe into dimly lit areas. Other features include a loud 95 dB audible alarm and multiple language support.

Ready to use, straight out of the box, the TigerLT does not require complicated setup procedures via a PC to perform basic functions.

Richard concludes: “Overall we have been really pleased with the TigerLT and the service provided by Ion Science. We would definitely recommend the instrument to other emergency hazmat response companies. In fact, I have already demonstrated the TigerLT to multiple fire department hazmat teams.”

What is the last step of any spill cleanup procedure?

Tips For Handling Chemical Spill Cleanup In The Workplace

Oil Spill Response Services: What They Are & Why They Matter

What is a spill response plan and what should be included in one?

What is a HAZMAT situation?

Your Starter Guide to HAZMAT Spills

Bruce leads the front line, responding to your emergency response calls at Lone Star Hazmat by overseeing our team of in-house, 24/7, emergency dispatchers. Oil field trained with experience that runs from drilling rigs to heavy-duty trucking operations, Bruce understands the urgency of your call into the emergency line and ensures that we will quickly identify your needs and resolve your situation. The Lone Star Hazmat proprietary dispatch system alerts the appropriate geographic location so we can send our teams to help you right away. From reviewing calls and providing critical support to resolve your environmental emergency situation, you can know you’re in good hands with Bruce and his team there to help, 24/7.

Dana oversees response operations both in the field and in the office to deliver better customer outcomes from Lone Star Hazmat Response teams, saving time and money while reducing risk and removing hazardous materials. With almost two decades of organizational leadership at the executive team level across industries including oil and gas and the nonprofit world, Dana knows how to deliver exceptional results in the most challenging situations. She focuses on team building, personal growth, and a “customer first” approach to quality and efficiency with an attention to detail that creates accountability for response team members and satisfaction for Lone Star Hazmat Response customers.

Heather is your go-to person for help with your account needs and financial matters. Managing customer accounts, customer billing, company accounting and payroll, reporting, and more, she works to quickly and accurately answer customer questions and resolve issues. Heather uses her attention to detail and focused determination to solve customer problems and improve customer satisfaction. If you have a question, Heather is likely to have your answer.

Jakob builds relationships with safety directors, brokers, insurers, transportation and logistics leaders, business owners, municipal safety officials, and others to help deliver quality outcomes to emergency response, environmental remediation, and regulatory compliance. Focused on solving customer issues in a cost-effective manner, Jakob is your go-to connection for developing a partnership that ensures safety and security for your business in the event of an incident or emergency. He will help you plan and prepare for mitigating risk and creating a safer workplace for your people and your property.

Richard is a servant leader in his words, his heart, and actions. He guides Lone Star Hazmat Response to focus on maximizing timely and efficient incident responses while minimizing cost. He leads the company in alignment with the Kingdom Purpose: To follow the Lord’s direction to care for and maintain that purpose, serving employees, customers, and circles of influence while showing the love of Jesus Christ.

Richard is an industry leader in the field of hazardous materials response, product handling, product transfer, and site remediation. In the public sector, he served as a firefighter, an EMT, and Fire Chief of Katy, Texas. Richard also has extensive private industry experience as a health and safety officer and a hazardous materials remediation expert on many level 1 and level 2 incidents. His work included EPA Superfund Site remediations throughout the United States addressing abandon oil and gas sites, illegally buried solvents and petrochemicals, along with abandoned hazardous materials that contaminated groundwater and surface soils. Richard was also involved with the West Middlesex radioactive Plutonium 232 release in 1991.

Richard was asked by Angelina College to teach the hazmat technician classes to the fire academy each quarter. During this time Richard was also asked to be the contributing editor for the Brady publication, “Hazardous Materials Technician”. With a career of industry expertise and leadership, he leads by the core values of Lone Star Hazmat Response, putting the safety of employees, customers, and vendors first, operating with honesty and integrity, practicing fairness and financial stewardship, guiding the company as a professional family, and encouraging professional growth and excellence, all in the love of Christ.